Some Pretty Harvests And Plants Update

I did not have enough time to tend to my plants at my backyard last week when I went back to my holiday home and had the pumpkin plant removed at my front yard. It was not until on Wednesday, when I finally managed to go back again and do something there - SOME LONG-DUE HARVESTS. 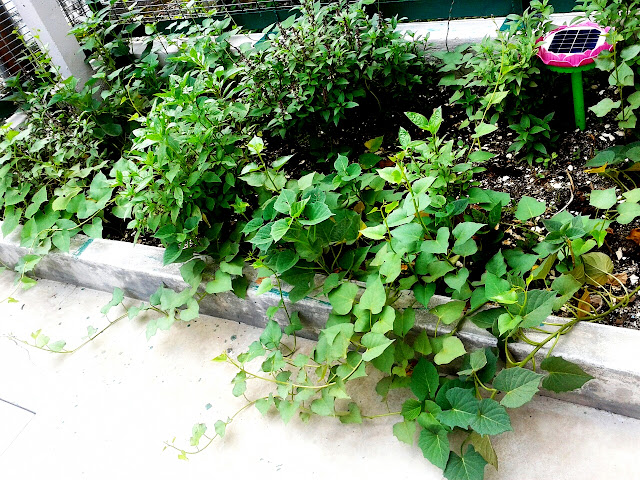 Like always, I had some really pretty harvests this time. Thanks to ' Mother Nature ' who never fails to take care of my plants whenever I am away. 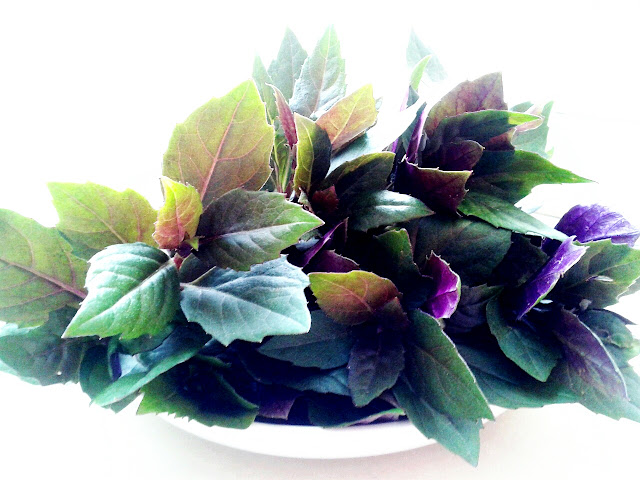 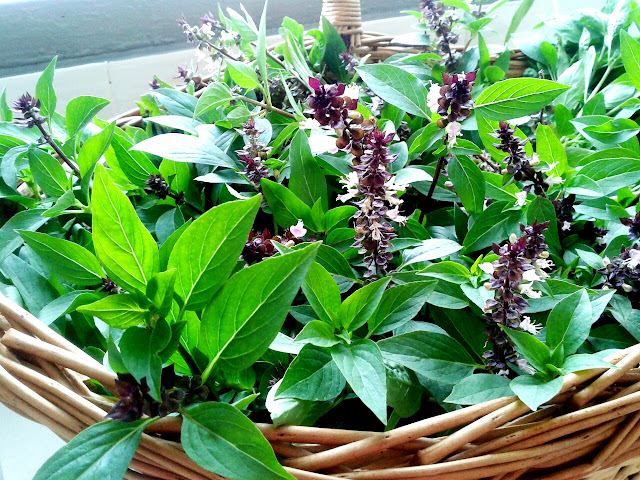 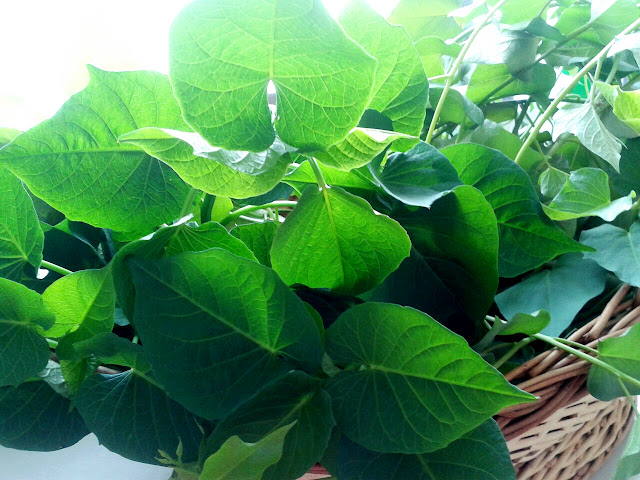 All of which had been shared with my sisters back here in Kuala Lumpur on Thursday.

Meanwhile on the same planter at my backyard....

The two Butterfly Pea ( Clitoria ternatea ) plants which I had transplanted from my eldest sister's garden last month seemed to have thrived - though they had yet to find the adjacent fence for support. And yes, I had finally made up my mind to keep one of the accidental Winter Melon ( Benincasa hispida ) plants. For I had learnt that it requires very little care to thrive and bear fruit; which would be really great for my frequently ' unattended ' garden.


The Madeira Vine ( Anredera cordifolia ), which I had planted for its nutritious leaves some months back, was really taking its sweet time, it seemed - in showing off its small, fragrant, cream-white flowers which would eventually turn black - slowly, and one after another. There was no indication that it would put a stop to its flower show anytime soon. I wonder if I would ever get to harvest any of its leaves at all. Sigh. Still hopeful though. Wish me LUCK! 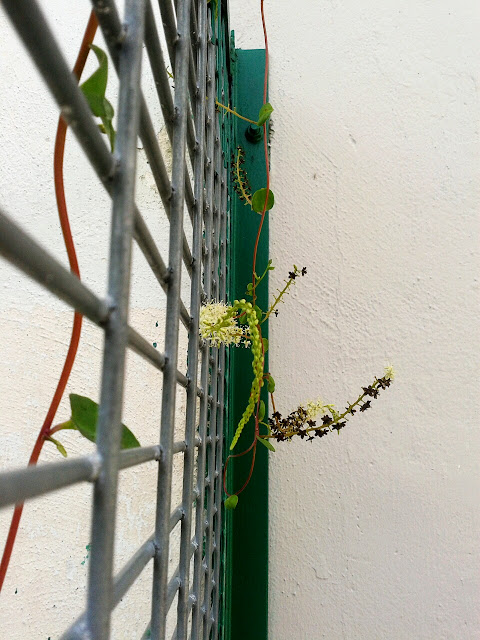 All for now. Thank you for reading this. Till next month... Bye!

A Most Noble Sacrifice, Not A Voluntary One Though

After much self-debates, I finally had the pumpkin plant removed yesterday. There was no more reason I could give myself to retain it any longer. My hand-pollination done on one of its flowers has not worked. The need to do something for the nutrient, space and sun-deprived sweet potato and especially, turmeric plants ( that were growing on the same planter at my front yard ) was becoming more and more apparently urgent.

A choice or decision has to be made fast. Either a plant or some plants must play ' Hero ' or ' Heroes ' ( be sacrificed to make way for, thus save all other plants ). ' Proudly ', it was decided that it ought to be the strong, long-time, space-dominating pumpkin plant. To be the first ever, ' appointed ' ( not a voluntary one ), most noble Plants Hero of my front yard planter.


It took me a long two hours or so to have its itch-inducing hairy vine and leaves removed completely. It had been tough for me. As my skin was very sensitive to its hairs. Though I had a pair of gloves on, I still got some red, itchy bumps on my hands; which slowed me down. As I couldn't let the itch passed without some scratching every now and then. Luckily it never lasts.

While having the pumpkin plant removed, I accidentally unearthed a sweet potato vine that had a small edible tuber at the end of its root. A white one that looked more like a radish to me. Though it was nothing rare to get a tuber, it wasn't something which I had expected. As I had planted them merely for their tasty leaves. Nevertheless, it was quite a pleasant surprise for me. I had it boiled and eaten later in the evening yesterday. Its texture was great though its sweetness was rather inferior.


My fourth sister suggested that I should just cut its vine at various points and leave them on the planter to rot and act as my soil mulch. But since I wanted to spread coffee grounds around the nutrient deficient sweet potato and turmeric plants soonest possible, I couldn't follow. Allowing them to dry out and wither away on the planter would take some time however little. I was worried that the somewhat stunted turmeric plants couldn't wait any longer. I had to save them as soon as I could.

Hence, after the removal, I immediately fertilized each and everyone of them with lots of coffee grounds. I also gave them all, a good thorough bath and drink. For the sun was already up and it was getting really hot when I finished. Finally, when all were done, I was able to breathe a sigh of relief. For I knew they could, from then on grow happily with ample nutrients, space and sun exposure.


Thanks to the dear Plants Hero - The Pumpkin Plant, for its most noble sacrifice!

An Escape To The Back Garden...

On Monday this past week, me and my siblings went to the columbarium at Sam Poh Tong Cave Temple in Ipoh to make offerings and pay respects to our beloved sister who passed away years ago at a very young age. The place was jam-packed with people ( old and young ) who came with similar intentions - to make offerings and pay respects to their deceased family members, relatives or friends. Like everyone else, we carried out the usual, annual ritual of burning joss sticks and candles. offering foods ( we used only vegetarian foods as we are vegetarians ) and finally, chanting and dedicating merits. The whole place was like a busy marketplace. Dirty, hot, noisy and messy. The smoke from all the burning, almost choked me to death ( a bit of exaggeration here though ) and made my eyes sore. There were some close cases of me being burnt by other people's joss sticks. However, we ourselves, were to be blamed for all the mess and pollutions!

A foreign tourists or two found the whole thing interesting. They disregard all the discomforts, braved and squeezed themselves through the crowd, just to take some pictures of us from every angle. Unlike them, I never wanted to stay a minute longer no matter the reason. I made the quickest escape of my life as soon as we had finished with the ritual. While waiting for my third brother who went to look for the washroom, I found myself straying away from the crowd into the cave through one of its openings. 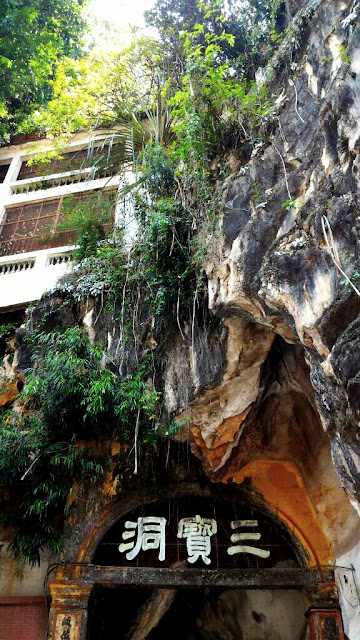 I passed through a quite spacious stalactites and stalagmites ' cave hall ' filled with many Buddha and Bodhisattva statues and a short, narrow. very cooling, passageway before I finally exited into a large, quite beautifully-landscaped back garden. The garden was surrounded by some amazing, natural limestone hills. A sight to behold really. Like those often depicted in Chinese brush landscape paintings. There was an ancient Chinese architecture building in the garden, backing one of the hills; which gave me a feeling of being on some mountains in China. Though the round fountain pond never really seemed to match the building's design, it looked alright to be there somehow. 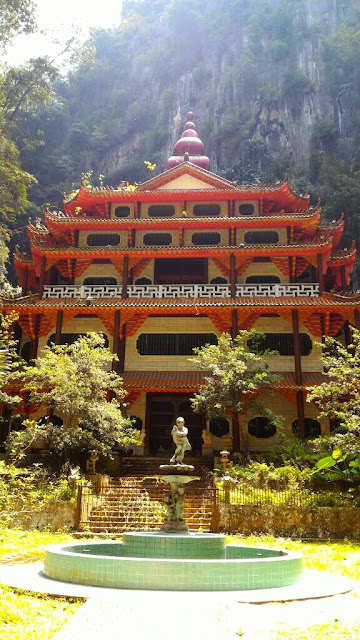 What amazes me the most was the natural landscape. Those lush greenery that settled on those limestone hills. They looked just so magnificently beautiful to me. Alas, my camera phone never seemed to have captured their beauty completely. 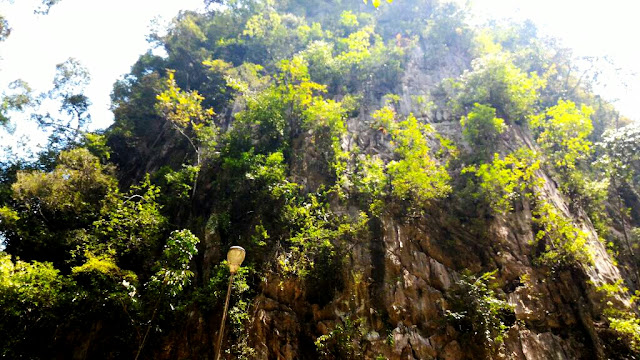 The garden was functionally-landscaped with some shady and some non-shady tropical plants, concrete walkways and some garden furniture here and there; thus making it a great place for strolling around, watching nature, practising meditation or simply enjoying the fresh air. 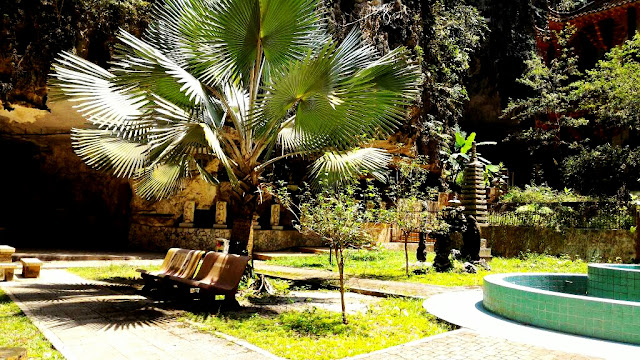 At one side of the garden, there was a man-made pond which I am guessing, has perhaps, hundreds to thousands of various sizes turtles living in it. I had a fun time watching them swim in the pond or sunbathe on  the ' concrete beach ' or move about the place when some local tourists fed them with vegetables. 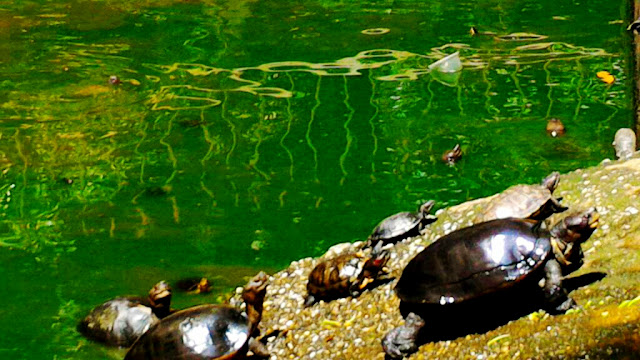 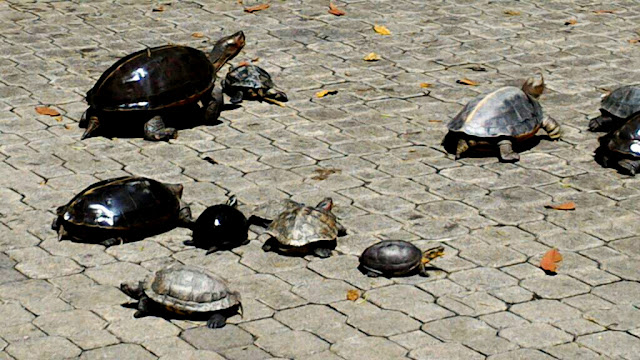 Adjacent to the turtles' pond, I spotted a lot of ' fungi ' growing on some tree trunk stools. So unique and fascinating that I was prompted to take some pictures of them. 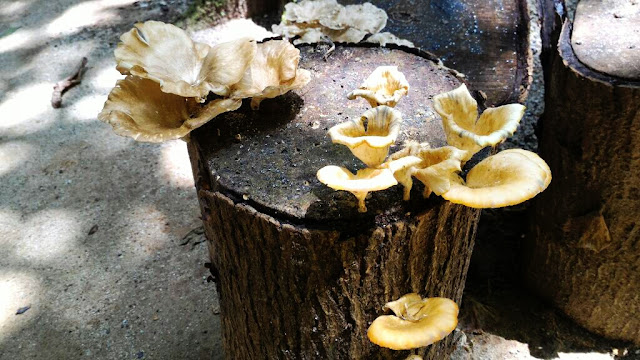 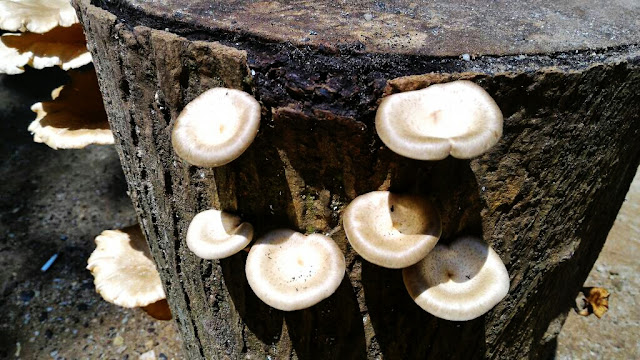 How quickly time always passes by when you are having fun! I haven't had enough of all the pleasures this back garden has got to offer. As I had to immediately leave it when my eldest sister came looking for me; saying that we could be late for the train back to Kuala Lumpur should I stay another minute.

Below here is a short video clip of the turtles in motion ( the voices in the video are from some excited local tourists ). ENJOY!

Email ThisBlogThis!Share to TwitterShare to FacebookShare to Pinterest
Labels: Public Gardens I Visited

Sometime last week, while I was shopping at a local shopping mall, I stumbled upon a very unique shop that sells dragon fruit seedlings ( tropical plants of the Cactus family ). From afar, they looked like some fake plants to me. However, when I took a closer look, I just couldn't contain my pleasant surprise. " Oh, these are real plants! How cute and creative! " I blurted out.

Whether planted in some cutely-drawn facial feature, small, white containers or natural-looking rice sack-wrapped containers and etc., or simply have them decorated with some cute, little ornaments, they make great, cheery table top gifts for oneself and others.

These little pretties ( seedlings ) must not be slighted for their size. They are not only decorative or pretty but great absorbers of radiation and carbon dioxide and are great producers of our much needed oxygen. And for those tired eyes, they are able to soothe them simply by being there in their usual, comfortable-to-look-at green colour; for those eyes to feast on.


Here are some of their pictures which I had captured from the shop ( for your eyes only! ): 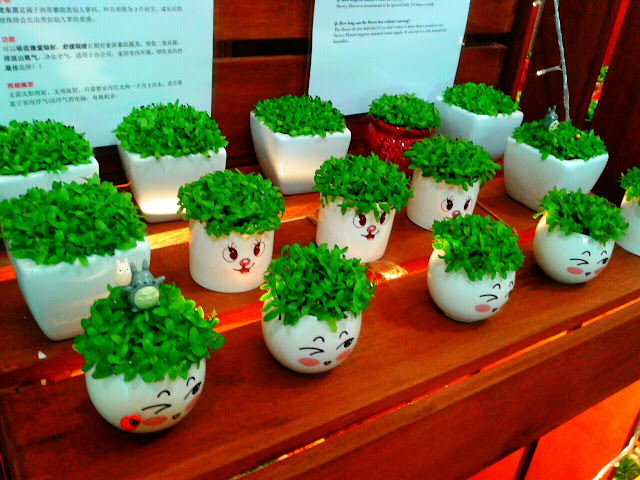 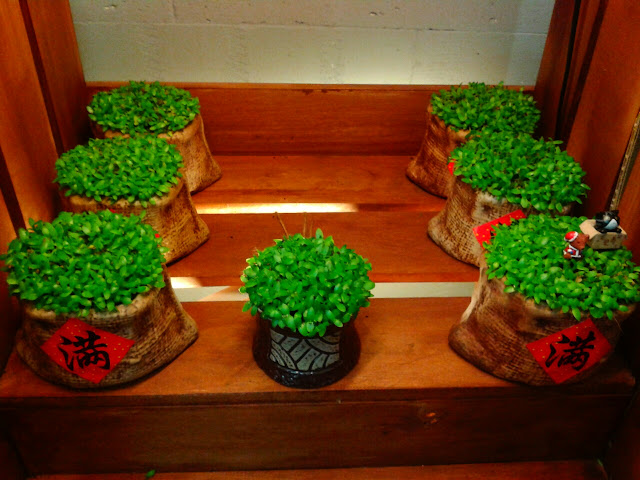 Having seen these little pretties planted in such creative containers, I suddenly have the urge to create one for myself. But, using a recycled mug and my all time favourite garden moss instead. Will have it posted here on this blog once I have it created!