These updates are somewhat belated. I should have got them written and posted last Thursday when I came back from my holiday home where my small backyard garden is. But having two other posts that I felt more excited about ( which I had posted HERE and HERE ), plus some handmade fabric flower orders on both my Etsy and Blog shops that needed my immediate handling, I had got no choice but to put the writing up of these updates at the bottom most of my to-do list. Forgive me for playing favourites and prioritization.

Back then ( before I came back to Kuala Lumpur last Thursday ) at my backyard.....

I had planted two Butterfly Pea ( Clitoria ternatea ) seedlings at a corner of my planter. I would make them trail up the fence when they are a little taller ( longer ). I did not grow these seedlings myself. I got them from my eldest sister's house. She has many of them in her garden as a result of split matured seed pods from her existing plants. I had pulled out two and kept them hydrated in a water-filled glass bottle on the day I traveled back. They looked fine before I transplanted them two days later. Hopefully at least one of them would thrive, if not two.

Some Winter Melon ( Benincasa hispida ) seedlings had emerged from the soil of my planter. On further investigation, I found out that they had germinated from the clump of seeds which I had lazily and thoughtlessly, dumped onto the planter instead of the rubbish bin during my previous trip back in February. Usually I am very careful with seeds disposal. As I do not fancy removing any of their young ones as weeds later. Somehow, because of my thoughtlessness back then, I had got many seedlings to deal with, which caught me in a dilemma. Winter melons or no winter melons? ( Decision to be made the next time I go back... )

My previous green and red Amaranths ( Amaranthus sp. ) had self-seeded on my planter before I harvested them in February. Some of them had germinated. Again, I am undecided as to just thin them out or remove them altogether as weeds. Either way, I feel cruel for depriving them of their chance to live on.

The replanted sweet potato ( Ipomoea batatas ) cuttings had established and were doing quite well. Judging by the look of them, I am almost sure they would provide me with lots of  tasty vegetables the next time I go back. Hurray!

The Gynura bicolor plants had progressed rather slowly with few new leaves growth after the harvest back in February. Perhaps it was because the weather had been a bit dry with little rainfall. Also it could have been that these shade-loving plants found it too sunny during this time of the year at my northwest facing backyard when the sun tend to settle in for a longer time everyday.

The Basil Leaf plants ( Ocimum basilicum ) were doing quite well. There were quite a lot for harvest when I went back two weeks back. Like always, I harvested only the top parts and left the bottom parts to continue growing. These plants have always been great contributors to my flavour herb needs. They never disappoint.

The Madeira Vines were going to flower profusely soon. There were lots of flower buds everywhere on the vines with some cute, little white flowers already in bloom. It looked like they had used up all their energy in producing the flower buds as there were generally little leaves produced.

Meanwhile at my front yard....

Having harvested the most delicious though cracked pumpkin, I had thought of removing the whole plant to give way to the sweet potato and turmeric plants to grow better. But, with so many flower buds appearing everywhere on the vines, I eventually decided to abort my intention to get rid of it. On the second last day of my stay there, I called myself lucky to chance upon a male and a female flower blooming on the same day. I jumped at the chance and did my first ever hand-pollination on the female flower. Hopefully, it would be a successful one. ( My previously harvested pumpkin was a blessed,  generous gift from nature )


Again, my poor turmerics plants ( Cucurma longa ) ( I have at least ten of them ) would have to wait for their chance to enjoy the space and full sun. Their growths had already seemed somewhat stunted. I wonder if they could ever make it till their chance come. I feel extremely sorry for them. Forgive me plants! ( If only someone would adopt them, they would definitely be able to enjoy full space and direct sunlight... )

Yes. You read it right. I welcome weeds. Those that grow on those cracked concrete spots at my backyard. I find them very pretty and unique. They make each of those spots resembles a miniature ferns-moss-weeds rock or stone garden. I did not and never have to plant them. Nature did and would do it all. I just have to sit back and enjoy. Now is only the beginning. They have just settled in not long ago. Hopefully I could see them grow, mature, reproduce, die and rot. Again and again. On those cracked concrete spots. I may be adding more planters of plants at my backyard in time. But never would I interfere with the beautiful works of nature on those cracked concrete spots. I want to see how those landscapes there would evolve over time. How nature would work wonders with those plants that people so-called ' weeds '. Those weeds that I so welcome! 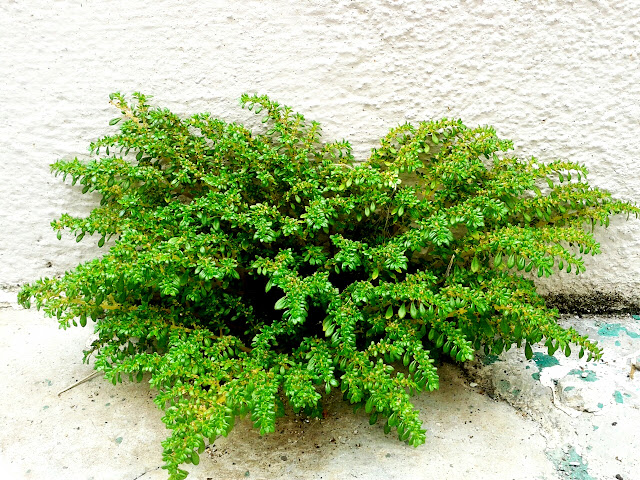 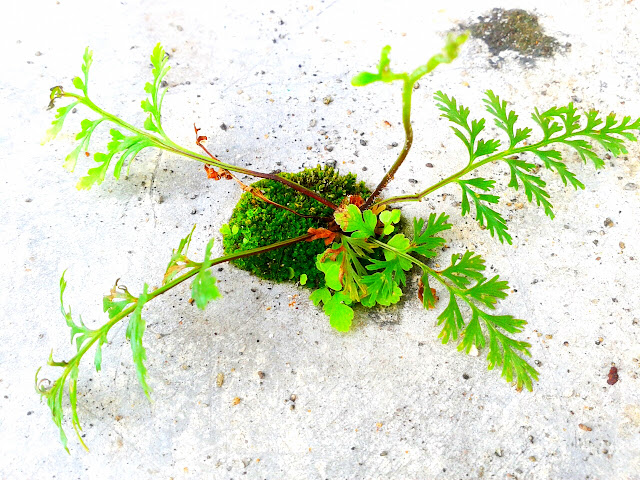 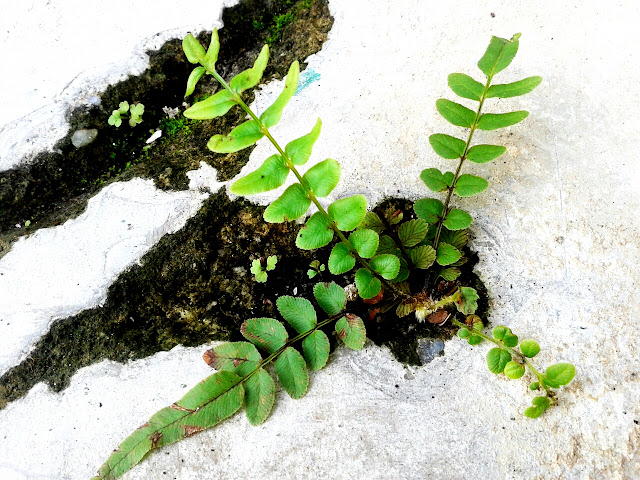 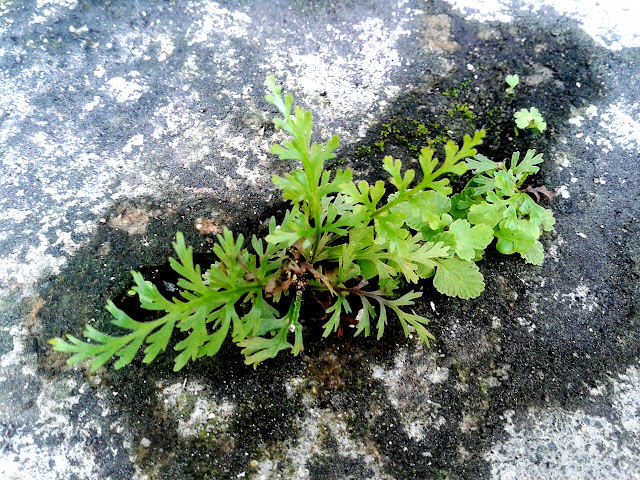 I Had A Cracked But Delicious Pumpkin!


My heart really sank when I alighted from my sister's car and saw my pumpkin last Saturday. I had never come across one that had cracks on its skin like mine before. Nor had I been warned that pumpkins could crack sometimes under certain conditions. I was rather shocked and sad. My heart just sank at the sight of it.

Without a second thought, I dashed back into my sister's car, took out a big, sharp scissors and immediately cut it off from its hard and woody stemmed vine. It was a rather small pumpkin and gave a reading of a mere 1.22 kg when placed on my kitchen scale. I held it with both my hands as though it was a precious gem. I examined the whole of my pumpkin carefully and in detail. Visually, it looked pretty normal except for the cracks. The skin's orange colour was quite even and beautiful. I tried to pierce its skin. It was so hard that I almost got my fingernails hurt. I buried my fingers into the cracked scars. They felt dry and hard. My heart lifted a little bit with hope. Relieved. It could still be edible, I thought to myself. Since there were no signs of it rotting. I gave it a few hard knocks with my knuckles. It sounded full and solid, not hollow. I was quite puzzled. A lot of people had told me before that pumpkins should sound hollow when they are mature. My pumpkin's skin and stem had indicated that it had matured. But somehow, the sound indicated otherwise. I had got to find out soonest possible.


So, first thing in the morning on the next day, I went straight to my kitchen for a knife. I laid my pumpkin on the wooden cutting board which I had placed on the concrete floor of my backyard. I was not going to cut it inside my kitchen. In case there are wriggling insect larvae coming out from it. It would be scary to have them wriggle or jump about in my kitchen.

I dissected my pumpkin into half. To my surprise, there were nothing that I had feared or imagined. No inner rotting. No larvae. I was relieved. My heart jumped with joy. I was right about my judgement on my pumpkin the day before. My pumpkin was perfectly great despite the cracks. The flesh was thick ( no wonder it sounded full and solid ) and had a nice looking bright golden yellow colour. Though its soft seeds indicated that it had yet to reach full maturity, the harvest was timely. The flesh looked great.

I cut the flesh into four portions and gave them to four of my siblings to cook. All of them agreed unanimously that it was one of the best tasting pumpkin treats they had ever tasted so far. They even complimented that its sweetness and texture were second to none!

I could never have been more contented and pleased. Thanks to My Dear Cracked Pumpkin ( whose remains are only in memories and pictures now ) !

Let's Use Urine In Growing Our Vegetables 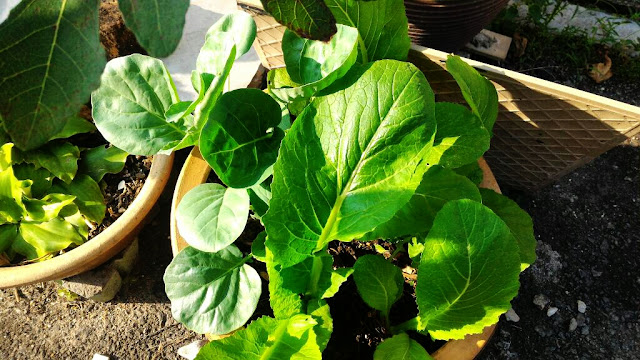 The other day during our chat on WhatsApp, my eldest sister told me how she had recently resorted to using urine in curing her under nutrition leafy vegetables. She told me that despite having fed her leafy vegetables with many types of organic fertilizers, they were never prettier until she watered them with her diluted urine. She said her vegetables looked significantly healthier and prettier in about just two days or so.

The idea of using urine as fertilizer is not something new to me. I had learned about it long ago from my mum. In fact, it was one of the most easily available fertilizers commonly used by people long before her time. It is just that I never wanted to accept it before. I scorned at the use of it and thought it was a most dirty and stinky way to fertilize plants, especially vegetables. I am sure many people share the same thought as me. Now, while we can accept using animal manures as fertilizers, why not urine? Are they not the same kind of thing after all? Wastes that are excreted from our ( human beings' or animals' ) bodies?

Moreover, as a matter of fact, urine is clean in that it contains few bacterial or chemical contaminants when retrieved from a healthy source. Plus, it has an almost complete, easily-absorbed nutrient composition that boasts a good nitrogen-phosphorus-potassium (N-P-K) ratio of 10:1:4, and more modest amounts of the trace elements that plants need to thrive.

So, why not overcome our squeamishness about this great, bodily waste product? Let's start using it ( urine ) as a source of fertilizer in growing our vegetables today. It is cost-free, effective, safe, simple and organic! All we have got to do are to collect, store and dilute it in 10 parts of water ( to avoid nitrogen burns ) before watering it onto our vegetables ( my sister always dilute hers in just 3 parts of water and it works fine for her veggies so far ).

Happy trying! We would not be disappointed for sure!