It was the garden where we, siblings, used to play and work on as children many years back. Today, it has transformed into a beautiful, mini, sandy fruit orchard. The change was a gradual one and the process was a rather tough experience. My eldest brother was the only person who made it all happen. All with his own, bare hands and occasionally, with the help of a hoe and a saw. He removed the previous carpet grass and unsightly plants. The only plant which was spared the removal was the Rambutan Tree which bore us the sweetest fruits of all, all those years. He leveled the whole garden with a wooden plank. After that, he planted new fruit trees here and there. He bought most of the tree saplings he needed. There were only one or two which he grew from seeds. Today, the garden are rather productive. The Rambutan Tree, the Ciku Tree and the Papaya Tree are bearing fruits. The garden looks so serenely beautiful that even our neighbours stopped to admire it whenever they passed by our house.

Email ThisBlogThis!Share to TwitterShare to FacebookShare to Pinterest
Labels: My Childhood Garden

It had been a few weeks since I last work on my small vegetable planter in my small backyard garden. There was really very little effort which I had put into it. So, I felt really lucky and happy as I still get to enjoy its produce(s) for the second time. They were not just edible but a feast for the eyes.

I had taken some pictures and here they are :

This morning when I went to my eldest sister's house in Cheras, I saw two pretty, small plots of edible greens in front of one of her neighbours' house. The vegetables and fruit tree were just so neatly planted that they caught my attention and hence, prompted me to take some pictures of them.

Here are the pictures which I have taken : 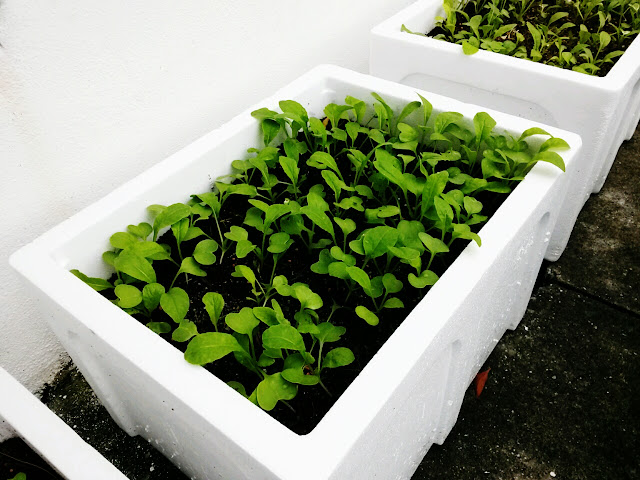 Email ThisBlogThis!Share to TwitterShare to FacebookShare to Pinterest
Labels: Other People's Gardens 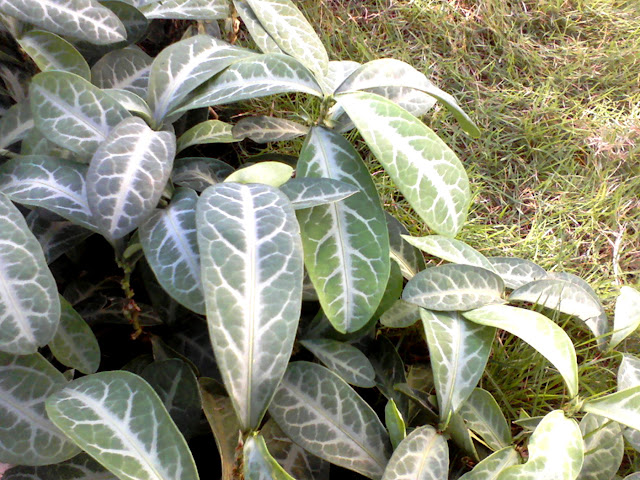 Since I was very young, we had this herb ( Dragon's Tongue or Sauropus Spatulifolius ) planted in our garden. My grandmother was the one who brought this plant home. My mum used to boil it's leaves in water with 'Luo Han Guo or monk fruit - Siratia grosvenorii'  for us to drink every now and then. She said it is very good for our lungs. We used to use a pair of scissors to harvest the leaves when it had grown to be a lot and let our mum made us the soup. As we had it planted next to the carpet grass ( Zoysia sp. ), my mum would trim the grass very low in order to let the plant get enough sunlight. She would water it everyday so that the leaves would be nice. My mum took good care of it. Sometimes, we had so much supply that our neighbours and relatives would come and get it from us. After my mum passed away few years back, the plant withered and almost died for about one year for unknown reason as though it was also mourning over the loss of her. After that, it grew back again, regaining it's past glory. Today, this plant is still surviving well in our garden. 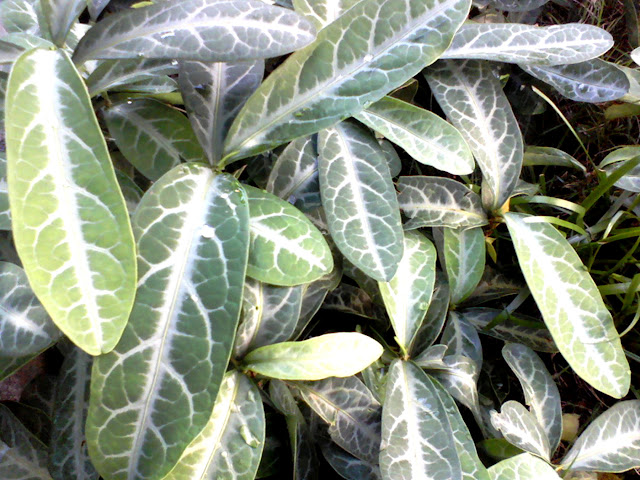 Daun Kadok ( Piper sarmentosum ) plants are wild growing vegetables which I enjoy eating very much. They can be found growing in abundance under the big Rain Tree next to my parent's house. The leaves are especially young and tender during the raining season. I just could not resist adding them to my noodles in my cooking when they are so deliciously edible.

Here is how I cooked them :

Ingredients that I used :

The way I cooked :

1) I heated the cooking pan on a gas stove.
2) When it was about to smoke, I added the sliced garlic and ginger and fried them until they are almost golden brown.
3) Then, I quickly scooped out the fried garlic and ginger into a small bowl leaving the oil inside the pan.
4) After that, I quickly poured in the big bowl of water and left it to boil.
5) Then, I put in all the Piper sarmentosum leaves and noodles, covered the pan and left them to cook until tender.
6) After that I added some salt, stirred and turned off the fire.
7) Later, I poured them out into a serving bowl and put the fried garlic and ginger on them.
7) I took some pictures and later enjoyed every bit of the tasty bowl of noodles.

Piper sarmentosum leaves taste of a kind, minty and a bit spicy. Not everybody likes them. So, make sure you can accept this kind of taste or flavour before you try out this recipe! You may also fry or beat in an egg for better taste. Hope you would enjoy the process and outcome as much as I did! 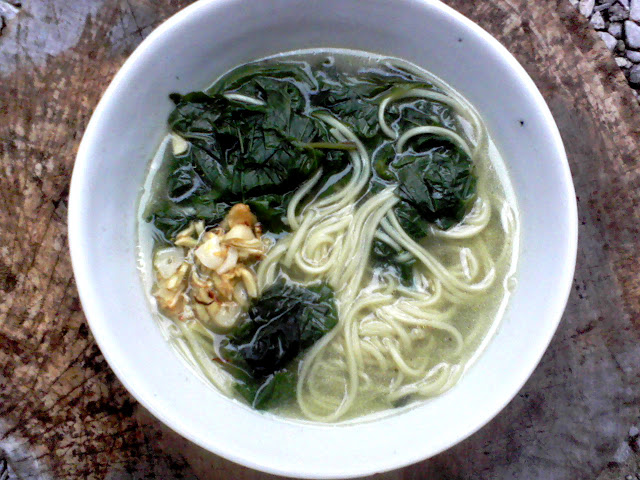 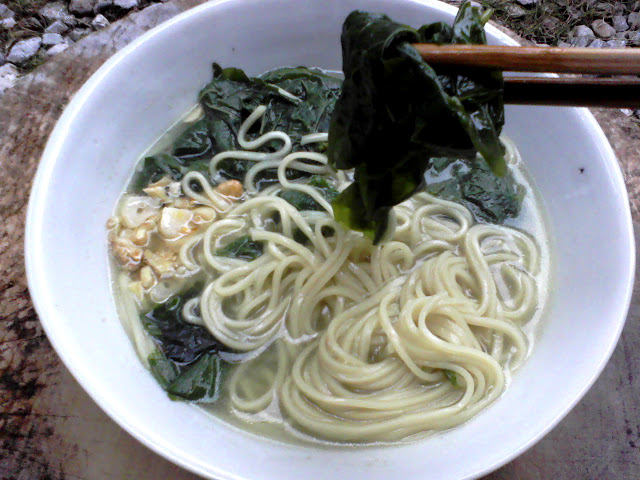 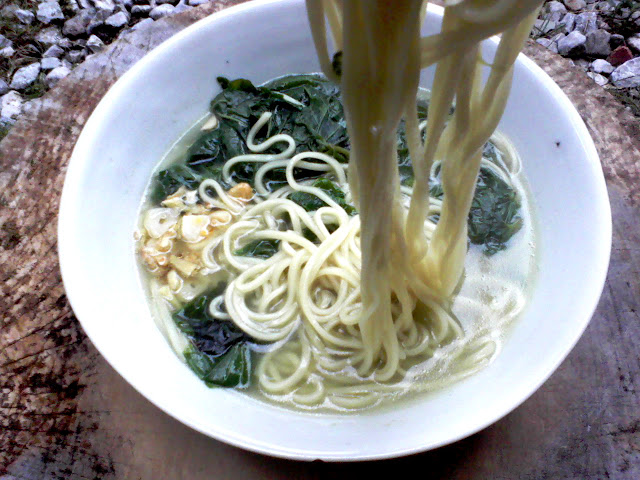 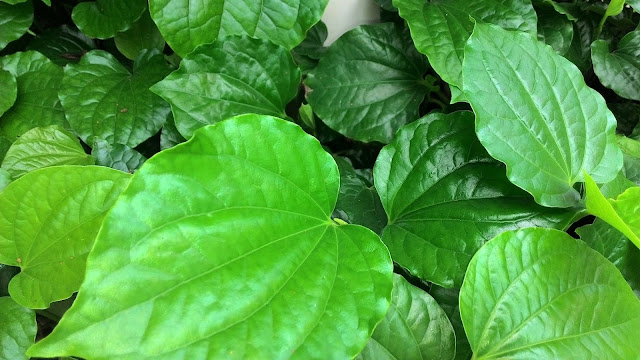 Piper sarmentosum is an erect herb with long creeping stems.  Its leaves are alternate, simple 6and heart-shaped. Young leaves have a waxy surface. Flowers are bisexual or unisexual, in terminal or leaf opposite spikes. Fruit is small, dry, with several rounded bulges. The plant has a characteristic pungent odour. It is found from the tropical areas of Southeast Asia, Northeast India and South China, and as far as the Andaman Islands. In Malaysia, the plant is usually found in jungles and places with plenty of shade. It is also planted in urban landscape gardens as ground covering shrubs.

This plant is often mistaken for its cousin Piper betel leaf plant.

It is a common plant used in traditional medicine and cooking.

The subtly peppery taste of the heart-shaped and glossy leaves adds zest to omelets and other viands. In Vietnamese cuisine, P. sarmentosum leaves are sold in bunches and are usually eaten raw. In Thai cuisine, it is used to wrap miang kham, a traditional snack. In Laotian cuisine, it is eaten as part of a salad. In Malay cuisine it is shredded for ulam, a type of Malay salad.

A study conducted by the Forest Research Institute of Malaysia (FRIM) shows that extracts from Kadok leaves have anti-oxidant properties. Piper sarmentosum is often made into drink to relieve the symptoms of malaria. The roots could be chewed to stop toothaches. A portion made from its roots is said to be diuretic. The drink has also been known to be effective in treating coughs, flu, rheumatism, pleurosy and lumbago. Young leaves are taken as ulam (condiment).