Do You Know That Bird's Nest Ferns Are Not Only Decorative But Edible ?

Never has it crossed my mind that the leaves ( fronds ) of the Bird's Nest Ferns ( Asplenium nidus ) that I used to admire a lot for their beauty are not only edible but very tasty, or so I thought. It was only recently that I came to know about it when I traveled to Taiwan with my sisters. In Taiwan, young and tender fronds of the ferns are found sold in small bundles as a type of mountain vegetables in the wet markets. These vegetables ( called San-shu in Taiwan ) are harvested from both, wild and cultivated plants. I never had a taste of these vegetables while I was there.

When I got back to Malaysia, I began to hunt for them from wild growing trees nearby my house that have got no owners. Finally, I found one that grew on the branch of a tree that I could reach. I used a knife to cut a few still curled fronds ( fiddleheads ). I put them inside a plastic bag and brought them home to cook. When I left, the plant seemed to have remained 'untouched' as the older fronds which would be too fibrous and hard to eat, were spared.

Here is how I prepared and cooked Bird's Nest Fern vegetables :

I washed the fronds gently with a toothbrush under running water and cut them into small, bite pieces. The whole of the curled fronds which I had harvested ( like the ones in the picture below ) were used.

After that, I washed and cut a few slices of ginger to cook with them. 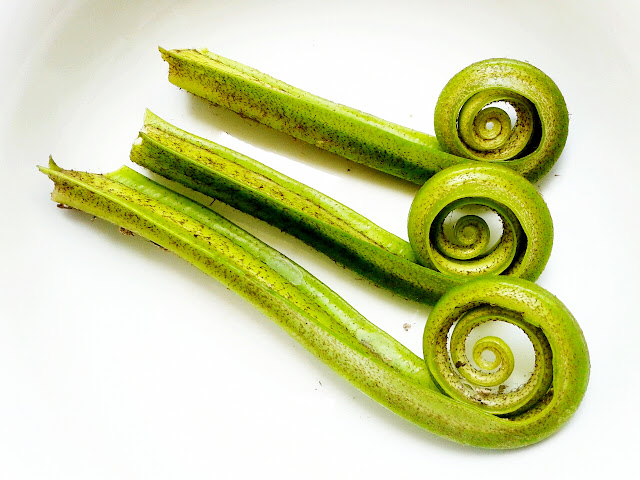 Then I took out a small pan and put all the cut pieces of the fronds and sliced ginger into it. I poured a little water, added a small spoon of oil ( grape seed oil ) and some salt ( rock salt ) into it. Soon after that, I placed it on the stove and cooked them under small fire until set. Then, I turned off the fire and served them on a small, white porcelain bowl to eat with my rice and other vegetables.

Note : They are crispy and tasted a little odd but great, lovely and yummy to me. I swear I would cook these vegetables once every week unless I could not get them. I have yet to know its health benefits but it just does not matter. 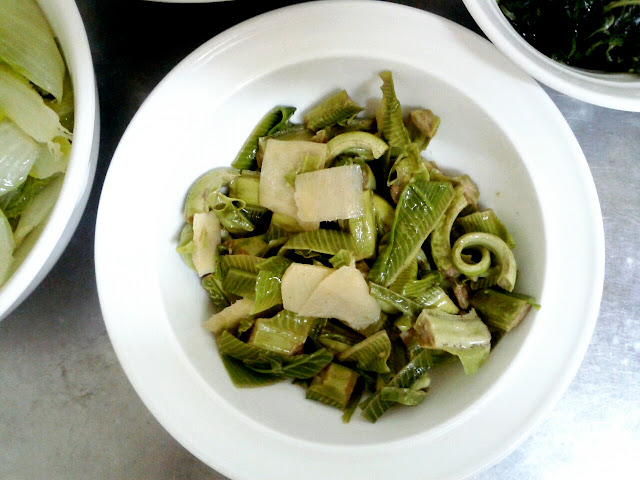 How To Make Eco-friendly Enzyme For Garden Use

Eco-friendly enzyme is a complex solution produced by fermentation of fresh kitchen waste ( fruit and vegetable dregs ), sugar ( brown sugar, jaggery or molasses sugar ) and water. It is dark brown in colour and has a strong sweet, sour fermented scent.


Here are the things needed and steps to follow in order to make the eco-friendly enzyme:

3) Leave some space in the container for fermentation.

5) Place it at a cool, dry and well ventilated area. Avoid direct sunlight. Leave it to ferment for at least 3 months before use.

6) During the first month, gasses will be released as a result of the fermentation process. Once in a while, open the container to release the pressure which has built up in the container to avoid it from rupturing. Caution : open gradually so that the gasses can be let out slowly and not causing big ' explosion '.

7) Push the floating dregs down the container once in a while.


Directions for use in gardens :

The eco-friendly enzyme can be diluted in water at a specific dilution ratio of 1 : 1000. It can used as natural insecticides, herbicides, pesticides and organic fertilizers. It can also be used to stimulate plant hormones to improve the quality of fruits and vegetables as well as increase their production. Spraying on the soil continuously for some time would improve the soil quality. The solid remains can also be added to the soil as organic fertilizers.


1) Do not use glass or metal containers that cannot expand.

2) From my experience, papayas should be avoided because of the terribly-smelled outcome. To make fresh, sweet smelling enzyme you can add apples, orange, lemon peel or pandan leaves.

3) The ideal colour of the enzyme should be dark brown. If it turned black, add in the same amount of sugar to start the fermentation process all over again.

4) If it has a white, black or brown layer on top of the enzyme, ignore it. If you encounter flies or worms in the container, leave it. The chemical reaction of the enzyme will resolve them naturally. Close and seal the cover tightly until set.

5) Eco-friendly enzyme is at its best after 6 months of fermentation. The longer it takes, the better it gets. It will never expire. Do not store in the refrigerator.


It is very easy to make and everyone can have great success. Most importantly, it has so much goodness for our gardens and environment. HAPPY TRYING !!!

Email ThisBlogThis!Share to TwitterShare to FacebookShare to Pinterest
Labels: Herbicide And Pesticide, Soil And Fertilizer

At one point of time, I have 2 giant-sized Asplenium Nidus ( Bird's Nest Fern ) planted in pots under the rambutan tree in my childhood garden. When my friend first brought them back from the jungle for me during a trip to Balik Pulau on Penang Island, they were still very small; about the size of a palm. I planted them in coconut shells which I get from the shop in town that sells shredded coconut flesh ( coconut 'soft meat' ). I stuffed the coconut shell planters with coconut fiber and organic soil as the root-holding medium. After that, I put them somewhere on the rambutan tree that could hold them well in place and watered them every day. As years passed, the plants had grown to be so big that I had to bring them down to the ground for stability and put them into bigger and more stable pots. I did not actually transplant them. I just placed them into the pots. The leaves were so much more beautiful during the raining season compared to the dry season though I thought I did water and 'bathe' them well enough then. During the dry season, my mum loved to help me trim away the dried leaves whenever she saw them. So, there was never a time that the plants did look unsightly. Every time I went home during my University years, my mum would often happily told me how well she had taken care of and pampered the plants. She was definitely right as the 2 Bird's Nest Fern(s) had grown to be so magnificently big ( almost 5 feet in spread ) and their glossy apple green leaves were so admiringly beautiful.

Today, these Bird's Nest Fern(s) were no longer around in my childhood garden due to our garden's complete reconstruction. I had never captured any pictures of them but the beautiful memories that I had of them seems to have stayed in my heart forever.

Asplenium nidus is a huge herbaceous epiphytic fern plant, wild growing on trees and sometimes on rocks, at elevations from sea level to 1,200 metres. The whole plant can grow to a height of 1 metre. Its entangled rhizome is a mass of roots below. Leaves are erect and flaring from the crown aggregated in a dense tuft above. Leaves are broad and numerous, radiating from the center of the plant giving the appearance of a bird's nest; spiral, leathery, smooth, lance-shaped with entire margins, sharply pointed tips and broad bases. They often attain a large size, 40 to 120 centimeters long, 6 to 20 centimeters wide.  Sori are numerous, elongate running along the line of the veinlets, reaching from the midrib about halfway to the margins. Spores are bilateral, monolete with a perispore.

The plant is native to East tropical Africa, Eastern Asia ( Japan and Taiwan ) through tropical Asia ( Eg.: Malaysia ) to northern Australia and the Pacific Islands.

It is also cultivated as an ornamental house and landscape plant.

- Leaves are parboiled and eaten by aboriginal tribe in Malaysia. In Taiwan, sprouts are eaten as vegetable.
- Ash from the burnt leaves can be used as a salt substitute

- The plant has been reported to be depurative (purifying) and sedative.
- Plant has been used for halitosis.
- The Malay used a decoction of leaves to ease labor pains; also, lotion from pounded leaves in water used as poultice to the head to relieve fever.
- In French Polynesia, used for stings and bites, contraception, chest pains and lice.
- In Hawaii, shoots used for general weakness, ulcers, and sores. Also, plant is part of an asthma regimen, mixed and pounded together with flowers of ki, mixed with poi made from kalo or uala (Ipomoea batatas).
- Shoots used for general debility, sores, ulcers.
- In Taiwan, used to treat fever; infusion used to alleviate labor pains, asthma, debility, halitosis, and sores.
- In North Eastern India, rootstock used against fever and elephantiasis. Also, used as emollient, in coughs and diseases of the chest. Leaf is smoked to treat colds.
- In Kumaun Himalaya, Uttrakhand, India, used in splenic enlargement, urine calculus, jaundice, and malaria.
- In Madya Pradesh, used for jaundice and malaria.
Others
- Veterinary: In Papua New Guinea, leaves used as contraceptive in pigs.

Although there are no reports of toxicity for this species, a number of ferns contain carcinogens so some caution is advisable. Many ferns also contain thiaminase, an enzyme that robs the body of its vitamin B complex. In small quantities this enzyme will do no harm to people eating an adequate diet that is rich in vitamin B, though large quantities can cause severe health problems. The enzyme is destroyed by heat or thorough drying, so cooking the plant will remove the thiaminase

Since I seldom stay at my newly- bought vacation home, the planters of vegetables in my small backyard garden and front yard are very often left unattended. Every time I go back for vacation, I would harvest the vegetables, if any, do thorough weeding, add my own naturally-derived fertilizer to the soil, do seeding and plant vegetable cuttings. After that, I would leave them all, almost completely under the care of nature unless I can find time to do it myself. Recently, it has been raining almost everyday. Hope the amount of water is just sufficient; not too less or too much. Pray hard now that the vegetables will all grow well and be a feast for the eyes in my small backyard garden and front yard in the weeks to come.

Here are the pictures of my planters of vegetables right now:

Pretty 'Snow White' - Our Once Upon A Time Garden Dweller

Snow White was named after her pretty, white, snow-like feather. She was quite a unique duck with rare characters. Being the only duck dwelling in our garden, she ate, played and slept with the chickens thinking that she too was one of them. She especially loved the chickens and would follow them wherever they went. She liked to bury her beak into the chickens' feather and suck out ticks from their body. Snow White was the happiest, worry-free duck on earth if not because of my fourth sister. She was a very naughty girl back then. Her hobby was to chase and catch Snow White for fun. But Snow White just wouldn't let her every time she tried to. She would always attack her in advance so as to protect herself. Perhaps it was because of this, Snow White never liked human beings. She must had thought we were bad creatures though we did feed her well and pampered her a lot of times. ' Thanks ' to my fourth sister for leaving such bad impression to Snow White.