Eldest Sis and Fourth Sis are BIG fans of the Chinese opera, a form of Chinese drama and musical theatre since ancient China. Every year, however busy, they would sacrifice some of their precious time to go back to Ipoh. To watch the once a year shows by Chinese opera performers from Hong Kong. Which are held in conjunction with the Hungry Ghost Festival around the seventh month of the Chinese calendar at the Kuan Tay Temple in Batu Gajah ( a small neighbouring town some 20 minutes drive away ). This year was no exception. They went back this past Saturday. And I followed. Though not for the opera shows. But for my small garden instead.

After MONTHS of hoping for possible harvests of its nutritious leaves, I finally gave up on the Madeira Vine ( Anredera cordifolia ).  I had it removed on Sunday. Though a bit reluctant, it was the wisest decision I had ever made. Or so I thought. It was almost leafless throughout its entire life. All it did was, flower non-stop and tirelessly! Until now, I still do not know what had gone wrong. ( Eldest Sis's one has lots of flowers too. But it has very bushy leaves at the same time. So, she is never short of leaves for harvest. How I envy her! )

The Thai Basil Plants ( Ocimum basilicum ) had grown to be very tall and strong. Their leaves were aged and tough. I gave them all ( three of them ) a good trim so that new, tender ones will form. The trimmed-off stems with leaves were given away to a neighbour who did not mind their tough texture. 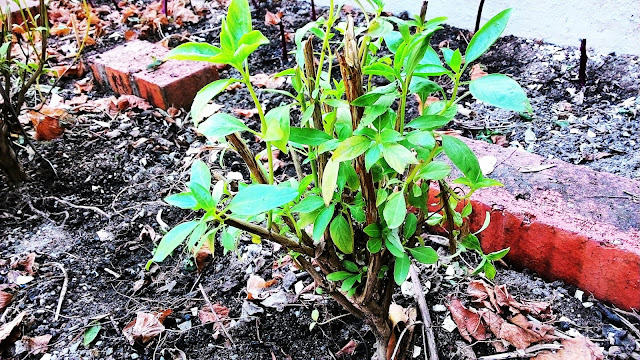 I had pulled out all those space-dominating Sweet Potato Vines ( Ipomoea batatas ) that had trailed far out of the planter. And harvested their leaves to make a delicious, stir fried dish for lunch on Sunday.

After the removal, I had a good-sized space to grow something else.

I had bought some Red Stem Malabar Ceylon Spinach ( Basella alba 'Rubra' ) from the morning wet market as vegetables on Monday. I used their old, fibrous and inedible stems to plant and fill up part of the empty space on the planter. Hope they will all root and grow! So that by the time I go back again, most probably this coming September, I would have some nice leaves to harvest and eat. 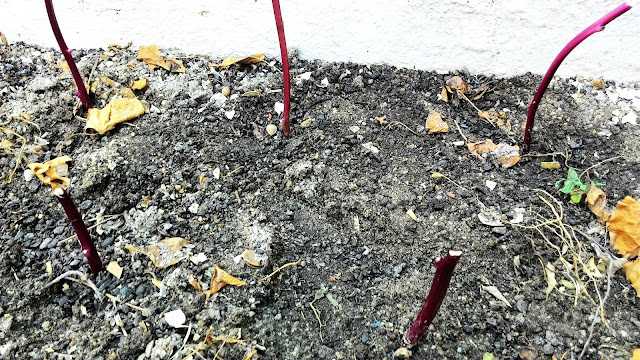 The remaining empty space, I had sown with some Radish (Raphanus raphanistrum subsp. sativus) seeds. Hope to see their seedlings or plants the next time I go back. They are easy and fast growing root vegetables. So, perhaps radishes above the soil then?

The last time I went back, I had buried two pieces of shrunk Ginger ( Zingiber officinale ) scraps into the soil of the planter. I was happy to find that they had both germinated and grown into healthy and strong looking plants. They would supply me with some nice, spicy gingers in months to come, if everything goes right. Hopefully. 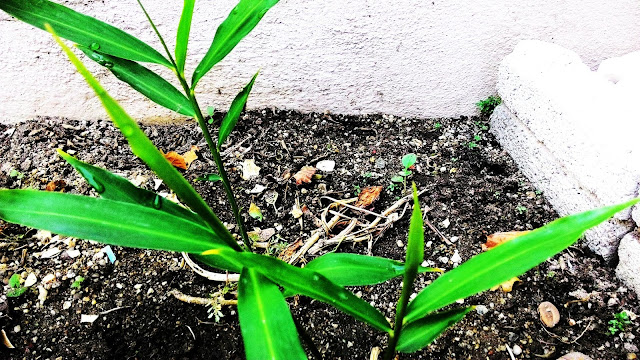 Mum's best-loved plant, Allamanda cathartica which was previously rooted inside a poly bag, was being transplanted onto the planter for the time being. As the poly bag had begun to tear apart. It has to stay there until I have gotten ready a permanent pot planter filled with soil for it. 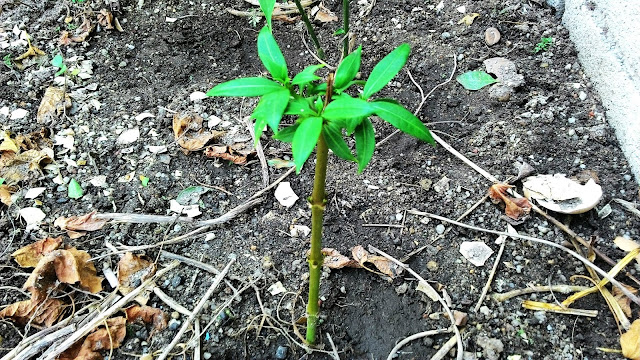 I have always hoped that the Butterfly Pea Vines ( Clitoria ternatea ) would grow a bit more bushy so that they could act as a privacy screen for my backyard. But somehow, that just did not happen. Instead, they produced quite a lot of flowers which I welcomed too and did harvest every morning while I was there. Big bowls, FULL every time! 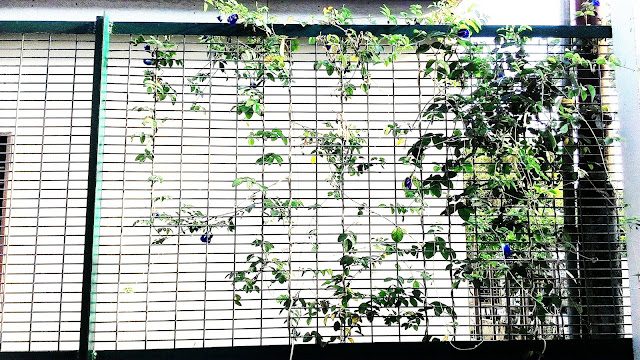 The planter looked clean and almost empty when I left for Kuala Lumpur on Tuesday. But in no time, it will be full again with plants. For sure! 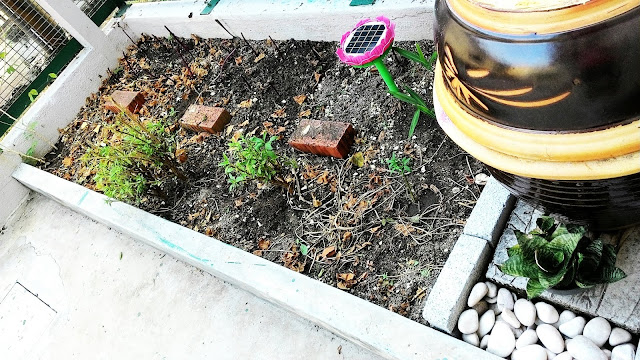 I had replanted the shade-loving Gynura bicolor from stem cuttings on the other side of the planter which gets shorter, daily sun exposure. Hopefully, there would be some rain every now and then to boost their growth.

As for the compost-making pot ( You can read about when it first started HERE ), I had not added or done anything to it other than watering. Nothing suitable was at hand then. 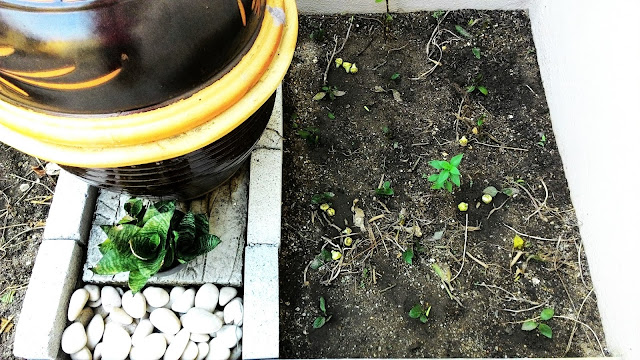 I had dug up the last of the sweet potatoes on Sunday. ( You can read about the previous harvest HERE ) They read a total 1.3+kg when put on the kitchen scale. All of which had been eaten by me and my siblings on Wednesday. Except for ONE. The BIGGEST one. That weighed approximately 500g. Which I had purposely reserved for my one and only younger sister, Jane, who would be coming back from the UK this coming September. After completing her graduate studies at the University of Wales. Hope she would love it! 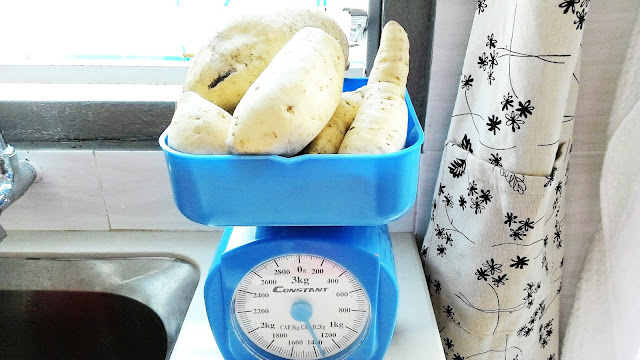 On Tuesday morning, I restarted quite a number of sweet potato vines with stem cuttings which I had removed from the planter when I dug up the last of the sweet potatoes days before.

I had also sown some Radish seeds at a corner of the planter. Hope they would all germinate!

There were only three Turmeric Plants ( Cucurma longa ) still thriving on the planter. One good-sized and two retarded ones. More than ten had perished. Not a sign of them ever existed. Wish these three remaining ones ALL THE BEST!!! 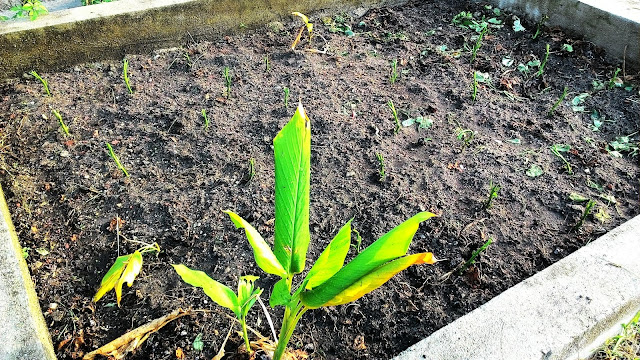 All for now. THANK YOU for reading THIS! Till next time... BYE!

I used to pop to Fourth Sis's apartment either for some chats or meals together during the weekends. But since last week, I have been doing so almost every day. Her small balcony container edible garden has progressed pathetically little and in dire need of care. Recently, Fourth Sis has been just TOO BUSY and OVER-OBSESSED with her new postcards and stamps exchange hobby, that she totally neglects it. Obviously, her interest in gardening is ' nil ' at the moment. The previous sparks have died out completely. So, I am taking charge of it now. Until she ( her sparks of interest ) returns one day. HOPEFULLY.

It has been more than six weeks now since ' the garden ' first started. ( You can read about it HERE ). But there are only three round, wide pot planters as yet. With only three types of edibles. One in each planter. Nothing has been harvested so far. I wonder if there would be any at all. As prospect seems just gloomy for now.

The first planted edible, Chayote ( Sechium edule ) has only grown about three feet long over the past few weeks. Extremely slow. The leaves seem to be infested by some suspected, flying, tiny, sap-sucking pests. Which slowly suck out sap from them. Until they eventually wilted. And die. I have trimmed off about five such leaves so far. There are still a few affected ones that may be saved ( See picture below ). Or so I hope. I am not sure where the pests have come from. But I guess, most likely, the fruit seed. The plant's origin.

Now, all I do is spray the leaves with my diluted, homemade eco-friendly enzyme every day or every alternate day. To boost the plant's growth and immunity. And see whether it helps to reduce the severity of the infections. Or deter the pests altogether. Or, at least perhaps, ' push ' the plant a bit to grow faster than the destruction caused by the pests. Hope it does help. Either way. Wish me luck! 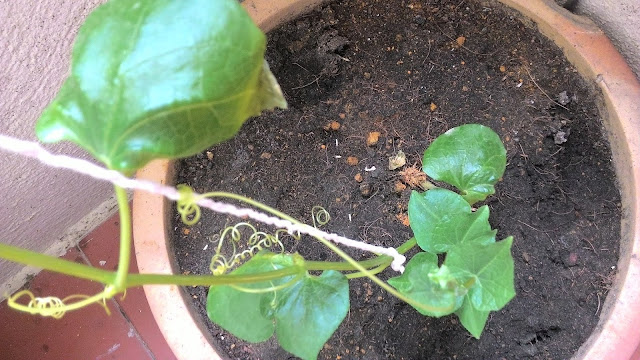 The second planted edible, White Bitter Gourd ( Momordica charantia ), seems to be growing rather pathetically slow too. Especially during the initial weeks. It is, however, a lot more lucky than its two neighbours. As it has not ' contracted ' the sap-sucking pests' infections like the poor Chayote, at least. Thanks to its strong-smelled leaves which those pests must have disliked and avoided, I think.

These few days, ever since spraying and watering it with my diluted, homemade eco-friendly enzyme, a ray of new hope seems close and distinct. Its growth seems to have significantly increased by double. Almost incredibly. And it looks much healthier too ( See picture below ). It has now, trailed far up towards the top of the string trellis which I have made for it and the Chayote. Reaching for the beautiful sky above. Hopefully some good news would follow soon. Lots of flowers! And eventually lots of fruits! Wish me luck! 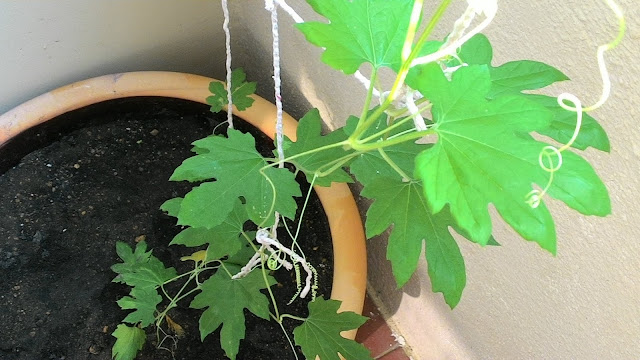 The third planted edibles, Radishes ( Raphanus raphanistrum Subsp. sativus ), were seeded a few days back and have since germinated. BUT, unluckily, the sap-sucking pests find their young, tender stems too deliciously tempting to resist. They suck out their sap mercilessly until they bow to them. ( See picture below that shows one such affected, vulnerable,  tender stem ).

The pests leave me totally at a loss. I do not know what to do to save the poor seedlings. So, I just let them be. And let the hungry pests do whatever they like. I let them suck. Until they are done and satisfied. ( I am sorry Seedlings! For giving up before trying to do something! )

When they have all finally succumbed to the pests' infections, I will start another type of edibles. This time, Coriander ( Coriandrum sativum ) perhaps. As its leaves would have a kind smell that those pests may avoid. And so, they may have a chance to survive and grow till maturity. Or so, I hope. Wish me luck! 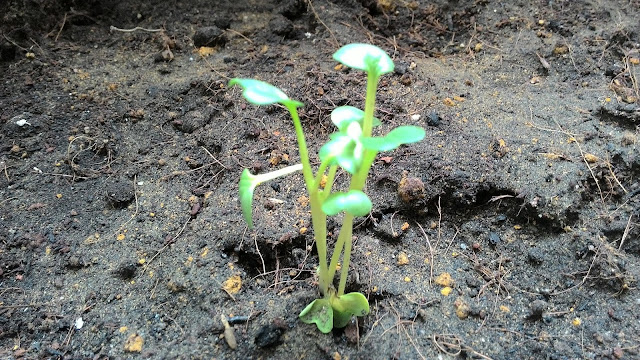 Though extremely small in size, this balcony container edible garden has the biggest of challenges for me to take up. Or so, it seems. Would I be able to not only take them up, but handle them well too?  Only time will tell...